Berryz Koubou’s Tokunaga Chinami shared this larger version of a 2-shot Maimi posted the other day in an update on the “Sugar Spot” blog.

Berryz Koubou’s Natsuyaki Miyabi posted this 2-shot with Maimi from the previous day’s Berikyuu event in an update on her blog.

The UpFront channel on YouTube has uploaded a clip showing the practice for the play “Sugar Spot”, which stars Maimi and Berryz Koubou’s Tokunaga Chinami. The clip features several scenes being practiced, and comments from the two stars.

Mentioned earlier by Maimi in several blog updates, she and Berryz Koubou’s Tokunaga Chinami will appear on the TBS program “Tsubokko” Wednesday, November 14th at 2:25AM. The official “Tsubokko” site has added a preview for their upcoming appearance, which reads as follows:

This is the report on our investigation of the two.
“Who is the girl who summons storms!? Suspicion”
“Who pretends to be a fool!? Suspicion”

You’re thinking our report is small!
We’re preparing to reveal even more secrets~.
There’s also talk with other members who hold nothing back~
And then… The two who insist they’re best friends… face a crisis!?

Idols’ true feelings will be revealed!!

The “Tsubokko” site can be seen here.

The TV spot for Maimi and Berryz Koubou’s Tokunaga Chinami’s upcoming play “Sugar Spot” has been uploaded to the UpFrontChannel YouTube channel. Performances of the play will start on November 21st.

An official blog for the upcoming play starring Maimi and her close friend Berryz Koubou’s Tokunaga Chinami, “Sugar Spot”, has been added to the Gekipro website, and can be seen here. Similarly to the “Sengoku Jieitai” and “CAT’S EYE” blogs, the “Sugar Spot” blog will likely serve as an outlet for the cast to talk about preparations for and performances of the play. Naturally, any updates Maimi makes to the “Sugar Spot” blog will be translated here.

The flier for Maimi and Berryz Koubou’s Tokunaga Chinami’s play “Sugar Spot” was revealed in a blog update by the play’s writer/director, Shioda Taizo. The full update can be seen here, and the site for the play here.

℃-ute staff member @staffff2 tweeted this picture of Maimi on location for another cycling segment. Staff wrote that Maimi not only brought the rain today, but also the fog.

The writer/director of many a play starring Hello! Project members, Shioda Taizo, shared this picture of Maimi and Berryz Koubou’s Tokunaga Chinami with their “Sugar Spot” co-star Miyahara Shogo in an entry on his official blog. 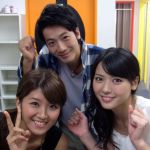 Berryz Koubou’s Tokunaga Chinami took to her Twitter account and shared these 2 pictures of her and Maimi interacting during a break in the day’s Berikyuu handshake event.

Sharan Q frontman and Hello! Project producer Tsunku♂ uploaded a picture of each of the members of ℃-ute in an update on his official blog, including this shot of Maimi.

A new channel for Hello! Project’s program “SATOYAMA Life” has opened on YouTube, and on it a live performance of DIY♡’s song “Fore Fore ~Forest for Rest~” has been uploaded. For more information on DIY♡, please check out this earlier update. 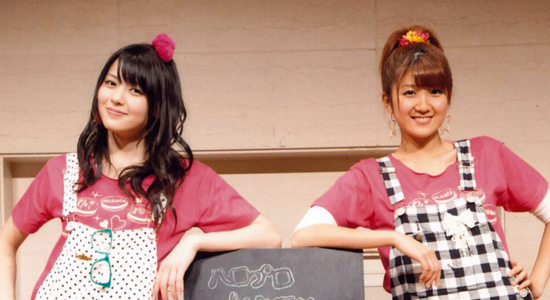 The Hello! Project official site has posted the news that Maimi will be appearing with Berryz Koubou’s Tokunaga Chinami in the Otona no Mugicha play “Sugar Spot”. Performances of the play will be held from November 21st to November 27th at Kinokuniya Hall in Tokyo, and on December 1st and 2nd at Ion Keshouhin Theater BRAVA! in Osaka. Not much about the plot is revealed in the article, except this cryptic tidbit explaining the title:

“Sugar spots” are the light-brown specks that appear on the skin of a banana.
I thought it meant they were spoiled, so I threw them away. But actually it’s a sign that they’re sweet.
Surely, this pain in my chest is one of my life’s sugar spots.
These two girls who have turned 20, they will begin a trip towards a different tomorrow.

The posting at the Hello! Project official site can be seen here.

S/mileage’s Wada Ayaka uploaded this 4-shot of her with her beloved seniors Maimi, Berryz Koubou’s Tsugunaga Momoko, and Tokunaga Chinami in an update on her official blog. 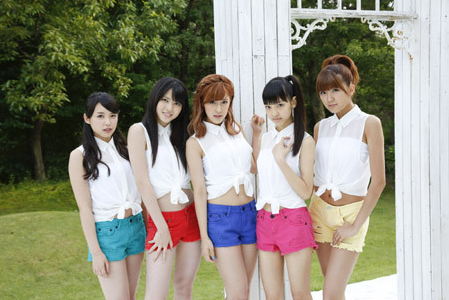 According to an article posted on the BARKS website, Maimi will be joining fellow C-ute member Nakajima Saki, Berryz Koubou’s Tokunaga Chinami and Natsuyaki Miyabi, and Morning Musume’s Iikubo Haruna to form a new unit named “DIY♡”, which will be part of the “SATOYAMA movement” project tied-in with the Hello! Project weekly program “Hello! SATOYAMA Life”. The article notes that the initials that make up the unit’s name commonly stand for “Do it Yourself”, but this time carries the meaning of “Dance in Your Heart”. DIY♡’s first performance will be at the summer Hello! Project concerts this weekend, and they will perform the song “Fore Fore ~Forest For Rest~”.

Maimi will be appearing alongside with Berryz Koubou’s Tokunaga Chinami on the Nico Nico Douga program “Nishikawa Takanori no Ienomi!!”. The program is hosted by Nishikawa Takanori, better known to many as TM Revolution, and will be broadcast live tomorrow at 11:00PM JST (10:00AM EST) at the link below.

Fellow ℃-ute member Hagiwara Mai shared a collage of shots from her, Maimi, and Chisato’s trip to Osaka to promote ℃-ute’s new single in her update on the official ℃-ute blog.

Fellow ℃-ute member Okai Chisato also shared a 3-shot of the 3 girls in her update on the official ℃-ute blog.

The trio of Maimi, Chisato, and Mai also appeared on the blogs of the radio program “Moritani Takeo no Osewaninarimasu!!“…

And last but not least, Berryz Koubou’s Tokunaga Chinami was snapped in this 2-shot with Maimi (via the Limited B version of “Kimi wa Jitensha Watashi wa Densha de Kitaku”), which was tweeted by H!P staff member STAFFdesu.

Starting this summer Maimi will be teaming up with her best friend Tokunaga Chinami for the two units “Smilies” and “Boke to Boke”, according to an article in the April issue of “U.S.O.”. The article reveals that their first single will be a double A-side, featuring the songs “Kimi ni Damashite Sumimasen” by Smilies and “Eee!? Uso Ja Nai!? ~Seishun no Gakkari~” by Boke to Boke. In the short interview included in the article, Maimi and Chinami explain that each unit will focus on different types of songs, with the Maimi-led Smilies song on the first single being more of a laid-back romantic song, and the Chinami-led Boke to Boke song being an upbeat and funny song.

“Kimi ni Damashite Sumimasen/Eee!? Uso Ja Nai!? ~Seishun no Gakkari~” will be released on June 31st, and come in 3 versions: Limited A (Smilies Ver.), Limited B (Boke to Boke Ver.), and a regular version.

Update: A scan of the article from “U.S.O.” has been uploaded courtesy of the fans at 2ch, and can be seen here.