It was announced today that ℃-ute will disband following a performance at Saitama Super Arena in June of 2017. An official translation of the announcement can be found at UP-FRONT LINK and translations of various news articles with additional comments from the members can be found at 910 Percent.

It was announced at the evening performance of ℃-ute’s spring tour that ℃-ute will be starting an official Ameba blog, which is already up here. Their GREE blog will continue for the remainder of March.

The official ℃-ute YouTube channel has uploaded a digest of “Alo-Hello! 3 ℃-ute”, which is now available on both DVD and Blu-ray.

▪The official ℃-ute Facebook page shared another group shot from the Otodama concert, as well as a solo shot of Maimi from the group’s shoot for an upcoming issue of “UTB”. 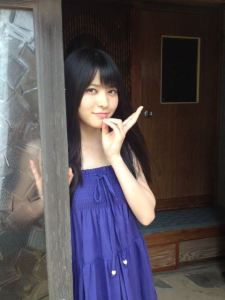 (1 & 2) ℃-ute members Hagiwara Mai and Suzuki Airi both uploaded pictures from the ℃-ute girls’ night out in their updates on the official ℃-ute blog today (Mai’s update, Airi’s update). (3) Morning Musume’s Iikubo Haruna shared this backstage 2-shot with Maimi in her update on the MM 10th generation blog, and wrote:

There are sunglasses that are decorations on our outfits,

but we played around putting them on.

Yajima-san… I went to see the play “Taklamakan”…

I really fell in love with her…

The more I look at her, the more beautiful she seems!!

I hope we can become closer during the Hello! concerts.

The 23rd edition of the YouTube program “Hello! Station” was uploaded to the channel of the same name, and features clips from ℃-ute’s performance in Paris (1:20) and the dance shot of their music video of “Kanashiki Amefuri” (18:11).

℃-ute to perform in Paris

Along with the announcement that ℃-ute will perform at the Nippon Budoukan on September 10th (℃-ute Day), it was also announced that ℃-ute will have their first overseas event this summer in Paris, France. The event will take place on July 5th and will be titled “℃-ute Cutie Circuit ~VOYAGE A PARIS~”. Few other details are available at the moment, but I’ll update again when they are.

Update: UpFront Link has posted more information on the event, including the venue and ticket information. The concert will be held at the La Cigale theater, which according to Wikipedia, can only accomodate up to at most 1389 people. The tickets will go on sale April 8th, and will run 38.80€ plus fees.

Tomorrow is the release date for ℃-ute’s 21st single “Crazy Kanzen na Otona”, and it’s been announced that their release commemoration event on the same day will be broadcast live from Ikebukuro Sunshine City over ℃-ute’s official YouTube channel. The event will start at 5:30PM JST (4:30AM EST), so if you’re able to, be sure to tune in and celebrate the release of the new single with the girls and those in attendance.

Update: An archive of the event was uploaded to their YouTube channel after the event, so I’ve updated the article with that video for those who missed it.

▪Fellow ℃-ute member Hagiwara Mai shared this 2-shot of herself and Maimi in her update on the official ℃-ute blog yesterday. In addition, Mai wrote that her and Maimi get along well, and joked that it might be destiny. 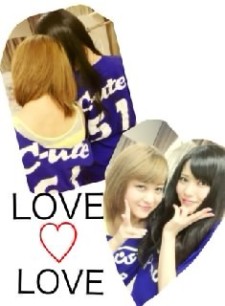 ▪Fellow ℃-ute member Suzuki Airi first posted this 2-shot with Maimi and followed up with a 3-shot that turned into a group shot in her update today on the official ℃-ute blog today. 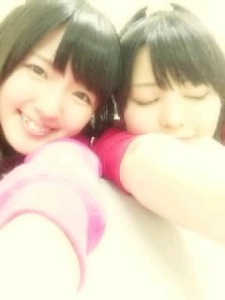 Starting off a special birthday-themed Maimi Sightings, fellow ℃-ute member Suzuki Airi shared this collage of 2-shots in her update on the official ℃-ute blog. Airi wrote that Maimi is a beautiful woman no matter where or by whom she’s seen, but is also scatter-brained. She continued on to say that no matter how much someone wants to, they can’t be like Maimi.

Nakajima Saki attached this image she created to her update on the official ℃-ute blog, and wrote that she worries about her leader, and hopes that she’ll lean on the rest of the members more.

Fellow birthday girl Hagiwara Mai uploaded these pics to her update on the official ℃-ute blog. Mai wrote that Maimi’s outward beauty is likely a result of her inner beauty, and that Maimi is like an older sister to her.

Batting last for the ℃-ute members, Okai Chisato shared this 2-shot with Maimi in her update on the official ℃-ute blog. Chisato wrote that she’s jealous of Maimi’s beauty, and how that coupled with her scatter-brained nature make her charming.

Various other Hello! Project members wrote messages for Maimi’s birthday, including S/mileage’s Fukuda Kanon, who in an entry on her official blog wrote that Maimi’s smile and scatter-brained episodes always soothe her, and that she wants to become closer friends with Maimi.

Maimi’s little cousin, S/mileage sub-member Takeuchi Akari, wrote in her update on the S/mileage sub-member blog that Maimi was her motivation for auditioning for Hello! Project Eggs, and she often e-mails Maimi when she needs advice. In addition, she wrote how impressed she was with Maimi’s solo version of “Ame” when she watched the video on YouTube.

Another S/mileage member, this time Nakanishi Kana, attached this tiny pic and wished Maimi a happy birthday in her update on the S/mileage sub-member blog. Kana added that she’s envious of Maimi’s style, and that her smile is sparkling and cute on concert videos. 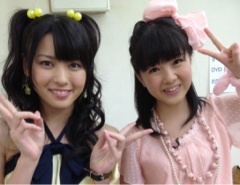 S/mileage member Katsuta Rina also wrote birthday wishes in her update on the S/mileage sub-member blog. Rina said that she’s happy when Maimi smiles at her backstage at the Hello! Project concerts, and that she respects her dancing.

First from Maimi’s fellow ℃-ute members, Okai Chisato shared these groups shot over several of her updates on the official ℃-ute blog.

Hagiwara Mai also had a couple of shots of her own that she uploaded in her updates.

Wrapping things up for the ℃-ute members, Suzuki Airi attached these shots to her entries.

Morning Musume member Iikubo Haruna shared these group shots in an update on the Morning Musume 10th generation blog from when herself, Maimi, Chisato, and Ishida Ayumi had a recording for the radio program “J-POP SUPER COUNTDOWN”.

The Enjoy Network Japan Facebook page uploaded a series of pictures of Maimi, who is hosting the “Idol Hour Hello! Project” program for the month of February. The ENJ staff mentioned that Maimi might be cutting her hair again soon, and that she spilled her drink trying to get it open (picture 3), possibly because of nerves.

Over on YouTube, the UFACTORYchannel uploaded a video of February’s 3 birthday girls (Maimi, Nacky, Mai) singing the “Happy Birthday Song” and showing off their birthday shirts that will be on sale during the finale of ℃-ute’s tour and at their birthday event.

Maimi also appears in a video on the MBCMS channel, where details of Hello! Project’s “Hinamatsuri Festival” are decided.

Fellow ℃-ute member Hagiwara Mai shared this 3-shot of her, Maimi, and Suzuki Airi in her update today on the official ℃-ute blog.

Fellow ℃-ute member Nakajima Saki shared these 3-shots with Maimi and Hagiwara Mai in her update today on the official ℃-ute blog.

The music video for ℃-ute’s February 6th release, “Kono Machi”, has been uploaded to the official ℃-ute channel on YouTube.

Websites Livedoor News and Barks have published articles about Hello! Project’s New Year’s tour, which each contain several images of Maimi during the performances.