Maimi performs at both ℃-ute’s yearly Christmas event and a wrestling tournament in her December 23rd update “HAPPY DAY!“. Full translation below.

This year’s outfits had a gingerbread theme

Up to now,
we’ve worn so many Christmas outfits it’s like “We’ve run out of options!!”…

Doesn’t this year’s feel like “I never imagined that!

Performers and actors also participated,
and so many people cooperated with us for this event

There were a lot of people who set time aside for us on the day before Christmas Eve,
so I’m really happy

It was exclusive to fan club members,
so I think there were a lot of people who couldn’t come, but thank you to those people for supporting us too

There was also a song we sang from the audience,
and seeing everyone’s smiles up close made me smile too

In addition,
after the event the staff gave us this cute thing 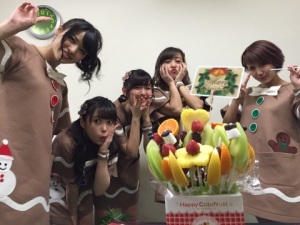 There’s so many fruits, so it’s cute~

Thank you so very much

Between the 1st and 2nd performances,

we borrowed the ring at the All-Japan Wrestling Championship Series “Emperor’s Cup”,

I was nervous about singing somewhere with a different atmosphere than a concert hall,

but everyone’s applause made me really happy v(^-^)v

Today was the selection for the Rio de Janeiro Olympics representatives,

so after we sang, we got to watch some matches｡ﾟ(T^T)ﾟ｡

That feeling can lead to a total reversal in the match

Once again I thought “People shouldn’t give up at anything・°・(ノД｀)・°・”,

and all of the competitors were cool(≧▽≦)

As expected, sports are great

Actually, before the matches, 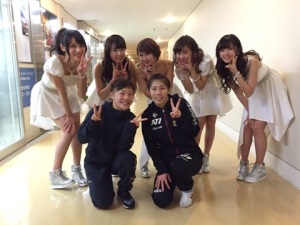 They waved at us from the audience while we were singing,

and they tentatively qualified for the Rio de Janeiro Olympics

The two of them waved to us from the victory stand,

and they were dazzling

They came to where we were sitting afterwards,

That they’d thank us…

Whenever we meet, I think “What amazing and charming personalities.”

We felt a variety of emotions while watching the matches,
and it made us think “We will work even harder

They gave us that feeling

The Christmas event was nice,
the Emperor’s Cup was nice,

so it was a really wonderful and packed day

I’ll do my best tomorrow too

Posted on December 24, 2015, in Blog, Translations and tagged Yajima Maimi. Bookmark the permalink. Leave a comment.