Blog update: “My clothes are striped~＼(^o^)／”

Maimi returns to the scene of a food disaster in her November 27th update “My clothes are striped~＼(^o^)／“. Full translation below.

The NaruChika tour in Fukushima

By the way, my clothes aren’t striped today~ 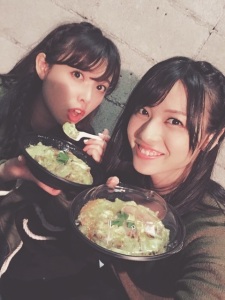 But here’s the Shima Shima combo

I have really bitter memories of this

When I went to Fukushima in March of last year,
I had this oyakodon…

We had a performance in Yamagata the next day,
and when I was riding the elevator at the hotel in Yamagata holding the oyakodon,

I got stuck in the elevator door,
and the oyakodon went flying as a result,

and it painted a beautiful arc through the air towards Nacky…

Nacky was covered in egg and chicken…

I felt really bad back then 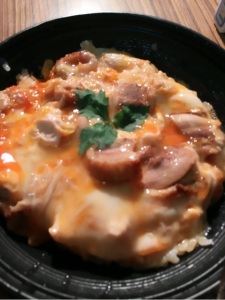 The rice was soaked with its flavor

It was really, really delicious

And then,
I learned the Touhoku dialect “Urukasu” at the concert

What do you think it means??

soaking cleaned rice before cooking it is called “Urukasu!”

I never thought they’d attach a name to that

I’m going to use it

a kind of bread called “cream box” is also famous 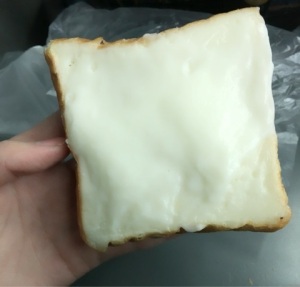 I’m really grateful for all the new encounters

Everyone who cheered for us even though you couldn’t participate,
thank you so very much

so please be careful not to catch a cold

Well then, until the next update~~ 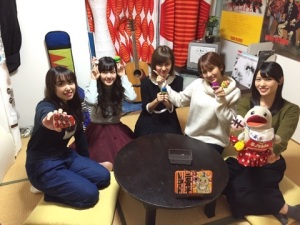 Please be sure to check them out

Posted on December 5, 2015, in Blog, Translations and tagged Yajima Maimi. Bookmark the permalink. Leave a comment.