Maimi departs paradise to head to the main event in Mexico City in her September 25 update “Mexico! 3rd day“. Full translation below.

The 3rd day in Mexico

We flew from Cancun to Mexico City early in the morning

It was impressive how the car ride in Mexico City was like the Indiana Jones ride at Disneyland!! lol

but there were a lot of bumpy parts in the road,
and it made my heart leap countless times!

Shortly after arriving in Mexico City,
we had a meeting with professional wrestler Mil Máscaras 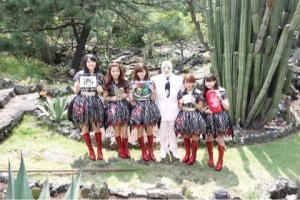 We held a symposium together,

and here, we were able to meet everyone in Mexico’s team ℃-ute,
which we had been eagerly anticipating。・゜・(ノД`)・゜・。

I was really, really happy about the cheers we received when we appeared,

and the fans got excited like “Whoaaaaaaaaa（≧∇≦）” when we started to speak,

Seeing that tugged on the hearts of all the members

Their kindness and desire to listen reached us, and I thought “They’re really warm people

I was able to listen to a lot of Mil Máscaras’ stories at the symposium,

and I learned from everything he said,

like “If you do something you love, you have to put all your effort into it!”!!

They were really persuasive words

When we shamelessly asked him,

he said “Next time I’ll make a mask with the ℃-ute mark on it!

I hope he really makes them~

I’m really, really grateful he appeared with us even though he’s busy

The Mexican mascot character “Lupita” also appeared at the symposium

I thought mascot characters were unique to Japan,

so when I met Lupita in Mexico,
it gave me a strange feeling like “Am I in Japan?( ﾟдﾟ)”! lol

By the way, it seems Lupita has an axolotl theme

Because of Mexico City’s high altitude,
there were countless people around me who had a headache on the first day,

I am really, really grateful for all the memories I made my 3rd day in Mexico

Posted on September 27, 2015, in Blog, Translations and tagged Yajima Maimi. Bookmark the permalink. Leave a comment.