Maimi becomes licensed and goes for a dip in her September 10th update “W, what!“. Full translation below.

“Gekkan Diver” goes on sale today,
and on the cover of the next issue going on sale October 10th,

my senior Yoshizawa Hitomi-san and myself will appear

I, Yajima Maimi,
earned my diving license this summer

To get my license,

I had to take lessons,
train in a pool,
train in the ocean…

It felt like the first time in a really long while that I’ve taken lessons,

and I wondered “How many years it’s been since I’ve swam in a pool and the ocean??(≧▽≦)”…

I love moving my body,
so it made me happy to be swimming…

The process of getting my license was really funо(ж＞▽＜)ｙ ☆

My first dive since then was for this “Gekkan Diver” photoshoot

The world in the ocean is reaaaaaaaaally beautiful

It’s something I’ve only seen on TV before,

but as expected, it’s amazing when you see it with your own eyes~ 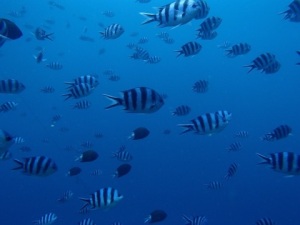 I was really nervous about my first dive,
but Yoshizawa-san lead me｡ﾟ(T^T)ﾟ｡ 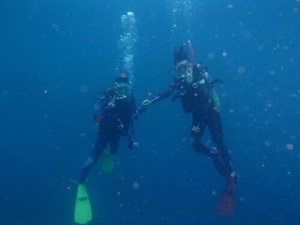 I had a strong image of it being scary under the sea, but I became really interested in it when I listened to her talk,

and got my license as a result

Even after the shoot was finished, she said “Let’s do diving again(o^^o)”,

so I hope that we’ll get another chance someday

There are so many things that moved me while diving that I don’t have enough room to write about all of them here,

And then, please look forward to our appearance on next issue’s cover~

The application deadline is September 17th at 11:59PM

Everyone, please be sure to come and hang out（≧∇≦）

Posted on September 21, 2015, in Blog, Translations and tagged Yajima Maimi. Bookmark the permalink. Leave a comment.