Maimi has a successful shopping trip with Nacky’s assistance and catches a musical in her June 23rd update “A day like this(o^^o)“. Full translation below.

Today we had rehearsal for the Hello! Project concerts starting on July 11th

I sweat so much I was surprised

( ﾟдﾟ)
But it was a reaaaally nice sweat

Afterwards I went shopping and out to eat with Nacky~

We searched for an item to use at work this time,

and this is what I thought

Things go smoothly when I shop with Nacky(≧▽≦)lol

It looks like they’d have it(≧▽≦)”
While searching around the store after saying that,

“,
and when I searched that area for what I was looking for,

” she asked,
and pulled it out of a place further inヽ(；▽；)ノ

I can rely on her~

Thanks to her, shopping was taken care of smoothly,

It was delicious and I became full,
so I felt happy(ﾉ´▽｀)ﾉ

But even now my breath smells of garlic

After that, we went to Ikebukuro Sunshine to see the musical starring Morning Musume。’15 and Sudou Maasa-chan, “TRIANGLE”~…

We waited for our manager at the meeting place,

We became worried, so we contacted them,

We said “We’re amazing showing up an hour before the meeting time(￣▽￣;)”,

Since we were already full,
we ordered drinks and some small things,

and we talked the entire time

After this and that, we were finally able to see “TRIANGLE”

Today was the β performance(・∀・)

The story really drew me in

Everyone’s acting and singing was wonderful, and I was able to see a different side to them than usual

Their growth since the last time I saw their acting was clear, and I could really see everyone’s efforts and ability to learn~

If you see the β performance,
you’ll definitely want to see the α -Alpha- performance too~(;^_^A

I asked for tickets to both,

but it seems I couldn’t get them…

I think it’ll feel different from watching it in a theater, but I want to check it out when it comes out on DVD

Kumai Yurina-chan, who also wanted to watch both performances like me, was also at the theater, and was seeing the play for the second time 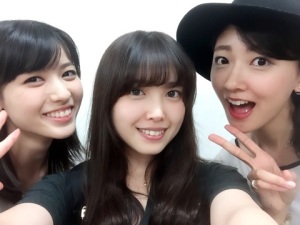 I was happy to see she hasn’t changed at all

We also called over Maasa,
and took a picture of the 4 members from the same generation 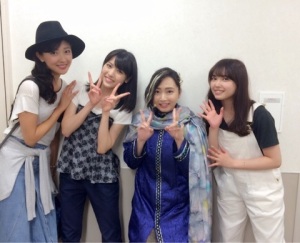 I was happy I could reunite with them after so long

Please be careful not to get injured,
and give a lot of people a wonderful time like you gave me today until the closing day

Everyone, get proper rest,
and do your best at tomorrow’s performance

Posted on June 25, 2015, in Blog, Translations and tagged Yajima Maimi. Bookmark the permalink. Leave a comment.