Blog update: “The place we dreamed of”

Maimi and ℃-ute reach a milestone and celebrate in grand fashion in her June 12th update “The place we dreamed of“. Full translation below.

℃-ute has entered our 11th year since formation

I can’t believe it…

Yesterday,
we celebrated our 10th anniversary at Yokohama Arena, which we always longed to do.

Was it when I was still in middle school?
I can’t remember if it was at school or work,

but I had the chance to write my dream for the future.

I remember that after writing “I want to be able to have a concert in an arena or dome!”,

I wavered a bit and rewrote it.

It wasn’t because I gave up on the dream,

but I couldn’t imagine myself standing at one of those venues,

and there were a lot of dreams before that one I hadn’t realized yet,

It was aiming so high,
I worried people would laugh at me saying “No no no, you really think you can perform there?”.

That’s how out of reach arena concerts were to me.

But,
I’ve always thought “I want to have a solo concert on a stage that big some day

Even standing on stage when that dream came true 10 years after our formation, I couldn’t tell if it was reality and I was unable to believe it…

When we were standing on stage,
I was able to see a lot of people crying.

The view I saw from stage which everyone made was really beautiful, warm, and wonderful…!!

Thank you so much for showing us that…

At first, my voice was trembling because I was nervous standing on stage,

but when it was over,
I only felt happiness(T ^ T)❤️

Every moment of the past 10 years led to today.

The times I was troubled, the times I cried tears of frustration,
those times were necessary for me to see that sight, I feel.

Even during times where things went wrong,
℃-ute was able to stand strong because everyone believed in and followed us!

I’m grateful from the bottom of my heart

I never imagined that beyond the times we had to hold out, wonderful scenery like this was waiting for us 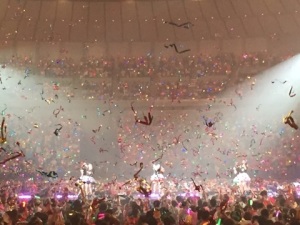 More than anything,
the fun time spent with everyone outweighs everything else

I think there are a lot of people who couldn’t participate as well,

but thank you for always supporting us!

Everyone who supported ℃-ute in the past is a part of the precious team ℃-ute who made us who we are today too!!

℃-ute is always waiting for you,
so any time things are tough,
or you think “I really want to meet ℃-ute!!”, please come back to see us anytime

Actually, the ex-members who we worked with as ℃-ute in the past,
Umeda Erika-chan, Murakami Megumi-chan, and Arihara Kanna-chan,
came running to the concert too

I was really happy that 10 years after our formation the 8 of us were able to feel the same atmosphere and see the same scenery together.

In spite of the amount of time we weren’t able to meet,
they’re always people who make me feel secure

With those members and everyone in team ℃-ute we love celebrating,
we reached our 10th anniversary!

While standing on stage,
I reflected on the feeling that I still want to keep moving forward with everyone.

Doing things frantically,
we grabbed ahold of our dream before we knew it,

and in that way, ℃-ute wants to see the scenery of Saitama Super Arena and Tokyo Dome with everyone!

I won’t keep my dream to myself like that time!(*^^*)
It’s because surely everyone in team ℃-ute feels the same way.

Let’s all make our dream come true together

Lastly, to everyone in ℃-ute

Thanks for running together with me as ℃-ute for 10 years

Around this time today I’m realizing that it’s not easy to continue doing one thing for 10 years,

but because I was with ℃-ute,
I was able to do such a difficult thing!!

I don’t want a single person to leave…

To each and everyone one of the members of ℃-ute who I was able to move forward with with the same feelings,

thank you from the bottom of my heart

Let’s continue to overcome any obstacle in our way together

But at any rate

and then,
LoVendoЯ’s Uozumi Yuki-chan
and Miyazawa Marin-chan,
who played guitar at Yokohama Arena,

and then,
to the many juniors who participated

Thank you for livening up the performance with us

Posted on June 20, 2015, in Blog, Translations and tagged Yajima Maimi. Bookmark the permalink. Leave a comment.