Maimi and the girls get another shot at impressing the attendees at a yearly festival in her April 25th update “Nico Nico Chou Kaigi 2015!“. Full translation below.

Our performance at “Chou Ongaku Matsuri 2015”, part of the “Nico Nico Chou Kaigi 2015” event being held at Makuhari Messe, has finished 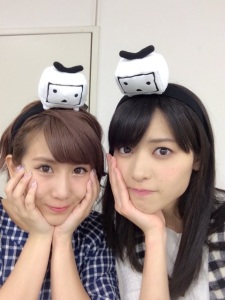 Aaaah о(ж＞▽＜)ｙ ☆
Even though I was looking from the stage, I could tell there were a lot of people watching us for the first time( ´ ▽ ` )

When we have solo concerts,
the crowd is nearly all people who gathered because they love ℃-ute,

so we feel amazing warmth,

Or should I say it was a feeling like

That’s the kind of atmosphere I felt it had

No no, it’s unlikely anyone was watching while thinking that,

but naturally the atmosphere was different from our usual solo concerts…

℃-ute was fired up in that atmosphere

In addition, team ℃-ute’s cheers and support are really reassuring at times like those(^-^)

When I think “Everyone is by our side

Everyone who came running to support us,
everyone who couldn’t participate but still sent your power to us, thank you so much o(TωT )

How many people were we able to recruit to team ℃-ute?

When we were given a chance like this,
I thought a variety of things like
“If only the performance had been a little more exciting…”,

If there’s anyone who made their debut as part of team ℃-ute today and is reading this blog,

I definitely want you to come to our solo concert at Yokohama Arena on June 11th,
the 10th anniversary of our formation…

We will combine our power and work hard so we can continue to advance from here,
so once again, please lend us your support

I’m grateful for our encounters

And then, I’m grateful to the staff of “Nico Nico Chou Kaigi” for giving us this wonderful opportunity to show a lot of people a ℃-ute performance・°・(ノД｀)・°・

Thank you so much

I hope we can appear again next year!
And then, I hope we’ve levelled up again by then!

We’ll do our best 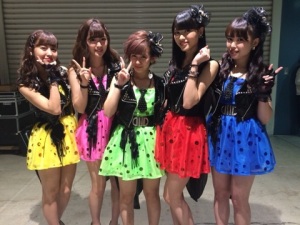 Posted on April 27, 2015, in Blog, Translations and tagged Yajima Maimi. Bookmark the permalink. Leave a comment.