Maimi travels all over the place promoting the new single in her April 3rd update “Shizuoka→Aichi♪( ´θ｀)ノ“. Full translation below.

So we split up into Yokohama (Suzuki Airi and Hagiwara Mai) and Nagoya (Yajima Maimi, Nakijima Saki, and Okai Chisato) teams,

but before that,
we promoted the new single since we had come all that way(・∀・)

we went to Shizuoka and recorded for SBS Radio’s “Anaraji”,
which airs every friday at 10:40PM

It will air April 10th

Next, we had a recording for “IPPO”,
which airs Monday through Friday at 6:30AM

It will air April 10th too

In addition,
we recorded a comment for “Uchiyama Erika no MUSIC DRIVE”, which airs every Sunday at 3:00PM

From there we went to Hamamatsu,
and the 3 of us ate Hamamatsu gyoza(*^^*)

I was full of happiness

Once my stomach was satisfied,

we went to K-MIX,
and had a recording for “Minna no 19HR!”,
which airs every Monday to Thursday at 7:00PM 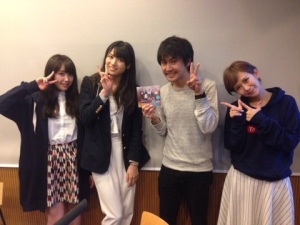 I was surprised to learn that what we call “3rd year, group 5”,

Let’s see, when I was a first year in elementary school,
it was 11HR(≧▽≦)

It’s pointless now, but I want to use it

Afterwards, we went to Nagoya,

and we had a recording for CBC Radio’s “Nagaoka X Sukuranburu”,
which airs every Tuesday through Friday at 10:00PM 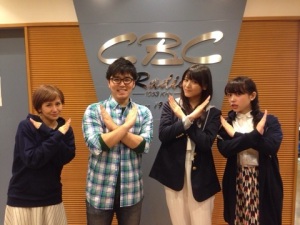 What, it seems ℃-ute has appeared as a guests on this program more than anyone else

Thank you for always

It will air at April 8th

Lastly,
we also recorded comments for @FM’s “Nandemo Kikasete DX”,
which airs every Monday at 1:00AM(*^.^*)

This will air at April 20th

There were a lot of announcements, but everyone who lives where you can listen to them, please be sure to check them out о(ж＞▽＜)ｙ ☆

And then, the event 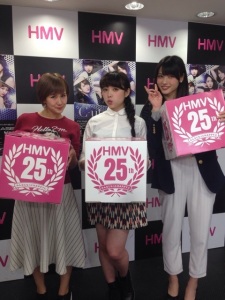 I’m sorry that it started later than scheduled.

A lot of people came on the way home from work and school in the rain, so I was really happy｡ﾟ(T^T)ﾟ｡

I was able to meet a lot of members of team ℃-ute,
so I received a lot of power today too(≧▽≦)

We’ll have a concert at Nagoya Koukaidou on April 11th,
so I’ll be glad if you make sure to come

Everyone who couldn’t participate,
but still sent us your feelings, thank you v(^-^)v

Posted on April 4, 2015, in Blog, Translations and tagged Yajima Maimi. Bookmark the permalink. Leave a comment.