I moved a lot and sweat,
and when I looked up at the studio wall during rehearsal and thought
“During the performance, the direction I’m looking will be sparkling with a lo~t of beautiful glowsticks~…

even though I wasn’t standing on the stage at Budokan yet, I became really happy

And then, when I saw the 5 of us in the mirror while practicing a particular song,

I really wanted to say to the other members “Thanks

Could we have ever imagined that we would be standing on Budokan when we were little…?

Ever since then, these members have been next to me during happy times, distressing times, and countless other times~

I was happy that I’d be standing on stage at Budokan with those members,

and I was overflowing with affection…

I’ll make the best concert possible with the members I love,
and then, the staff,

I’ll enjoy the Budokan concert with all my might

I think there are people who unfortunately can’t participate,

but our feelings are one

I hope that you’ll send your cheers to Budokan somehow

I was given the finished goods

From the goods that will be sold at Budoukan,

Since the title of the tour is ~Monster~, I tried making the members monsters

Please be sure to get them when you go to Budokan

Changing the subject,
since today was the weekend,
I went shopping with my mom before rehearsal

I only had about an hour and a half,
so we were in a hurry,
but it was fun going shopping for the first time in awhile( ´ ▽ ` )ノ

Since we were running out of time,
my mom said “Alright, mother will buy lunch, so Mai, buy our drinks!ヽ(´o｀；”,

so I said “Got it

(*^^*)”,
and bought a muscat grape with vinegar drink for myself,

and black sesame milk for my mom

As I sad “I got them

My mom became depressed saying “The vinegar sti~nks＿|￣|○ I just got it back from the cleaners~(￣◇￣;)”!(^◇^;)

But she liked the black sesame milk I chose for her,
telling me “Delicious~

What kind of weekend did everyone have?

Let’s have a wonderful day tomorrow

Oonishi Akiko-san, who is part of the same office as me, currently has New Year’s cards with her tweet art on them

There was a lot of reaaaally cute drawings

Please be sure to use them for next New Year’s, if you’d like 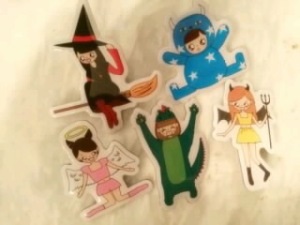 Posted on November 13, 2014, in Blog, Translations and tagged Yajima Maimi. Bookmark the permalink. Leave a comment.