Maimi plans her event and goes out to eat with Chinami in her July 24th update “Fufun♪( ´θ｀)ノ“. Full translation below.

After updating yesterday,
I had a meeting for my event with Berryz Koubou’s Tokunaga Chinami-chan on August 19th( ´ ▽ ` )ノ

Together with Chii and the staff, we had conversations like

“We want to do this kind of corner

It was a restaurant we often go to,

and Chii-san is friendly with the staff (lol)

She’s about the age of our mothers,

but she made me think “What a playful person~

(^o^)” when she asked us “What’s the secret to taking a good picture”,

And then, Chinami eats a lot

Chinami ordered ramen and I ordered fried rice, and we also ordered gyoza and shrimp in chili sauce,

and there was an incredible amount even though they were portions for one person,

and when I was unable to eat anymore of the fried rice and said “My stomach hurts(°_°)” after she had already finished eating her ramen, she ate the rest for me♪( ´θ｀)ノ

Let’s go out to eat again

Now then, now then, afterwards I met up with Nakajima Saki-chan, and we appeared on bayfm’s “ON8 + 1”,

but before we appeared, I sent an e-mail to Suzuki Airi-chan that read

and she responded “Yeah!” along with a picture and video from the fireworks festival in Kamakura

Both the picture and video were spellbinding,
and made me think “Whoa~♪( ´θ｀)ノ Beautiful~…

It gave me a summer feeling(o^^o)♪

Somehow or another, I want to see a fireworks festival this summer too (o^^o)

It had been a really, really long time for me,
but the host Sana-san was rea~lly funny,
and we laughed a lot

I wish it could’ve been broadcasted! lol

Later today at noon,
I will appear with Okai Chisato-chan on J:COM’s “JTV Style”

We will introduce an overseas drama,
so those who have the time, please be sure to check it out

Well then, well then, let’s do our best all day today

p.s.
My close friend sent me an e-mail saying

“,
and attached a picture of ℃-ute’s page in the girls’ fashion magazine “CanCam”(o^^o)

I’ll attach pictures from the photoshoot 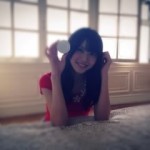 Posted on July 26, 2014, in Blog, Translations and tagged Yajima Maimi. Bookmark the permalink. Leave a comment.