There was also someone who asked “Do you have a blog??”,

and when I thought about the fact that there’s people who don’t know a lot about us who came as well, I became happy

It was really fun talking to everyone

Everyone who participated,
everyone who couldn’t but supported us anyways, thank you♪( ´▽｀)

After the handshake event, everyone went to eat motsu-nabe

There is another of those restaurants in Osaka, and so we decided “Let’s all go this time

Everyone ate while talking

I laughed a lot

Dinner was a lot of fun too

After eating, I noticed I missed a call from my mom

So I called her back

And then, my mom was half-asleep… lol

She wasn’t able to speak clearly(^◇^;)

My mom was a little funny half-asleep

It was filmed around Christmas last year, so I felt nostalgic thinking “It’s already been 5 months~(・ω・)ノ”

I wonder if everyone in Osaka watched it

Today is the ℃-ute concert in Osaka

It’s been 3 weeks since our last concert performance, so it feels like it’s been a long time

Well then, well then, let’s have a wonderful day today 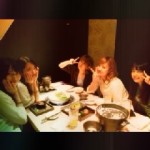 Posted on June 1, 2014, in Blog, Translations and tagged Yajima Maimi. Bookmark the permalink. Leave a comment.