Maimi has to rush to get ready after sleeping in in her January 11th update “Sleepyhead…( ￣Д￣)ノ“. Full translation below.

I was in a hurry this morningΣ（゜д゜lll)

We had a shoot all day yesterday,
so we stayed the night at a hotel,

When I woke up again, there was only 30 minutes until the meeting time…

It was the fastest I had ever gotten ready before!

While I thought “If I work hard, even I can get ready this fast

In my rush I was wide-awake instantlyΣ（゜д゜lll)

So that I’ll have plenty of time to get to where I need to go, I’ll be careful not to fall back asleep…(・_・;

I’ll regroup and write about yesterday

We had a shoot in Yokohama

I travelled by bike from Tokyo Tower to Shizuoka’s Kunouzan Toushouguu to pray for its success,

and we passed by some of the same places by chance yesterday!(◎o◎)

It made me remember a variety of things…

The place where it was late at night, I got lost, and I felt like my heart would break in the intense cold was Yokohamaヽ(´o｀；lol

When I think about it now, they’re really good memories

We filmed that scene on this road

We moved to a studio indoors afterwards and had another shoot

It was rea~lly fun

Unfortunately, Hagiwara Mai-chan is too young to appear,

It’s a show I usually watch at home,
so I was really happy to be able to appear on it,

and just like when I watch at home,
I was laughing as hard as I could at everyone’s can’t-fail jokes(≧∇≦)

As expected, comedians are able to charm people with the way they construct their stories, and the tone and tension of the voices

In addition,
it was the 10th anniversary special,

so I was really honored we were asked to appear

Everyone who has the time, please be sure to watch

I’ll be able to meet everyone

I hope everyone has a wonderful day today… 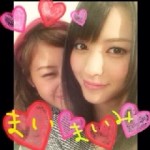 Posted on January 11, 2014, in Blog, Translations and tagged Yajima Maimi. Bookmark the permalink. Leave a comment.