The weather is nice today

One week has already passed since New Year’s

Yesterday we bid farewell to Nakano Sunplaza, where we had been performing since New Year’s Eve…

Everyone cleaned the dressing room,

There was only one performance yesterday in the evening,

During the shoot I thought
“A~h, is everyone at work and school saying ‘Happy new year

I think there are a lot of people who had their first day of work and school yesterday,
so how was it??(＾ν＾)

A lot of those people came to the concert too…

I was really happy

Thank you for coming even though you’re busy

We had 3 performances the day before, so after yesterday’s was over, I was like “Huh?

I laughed a lot with everyone yesterday, so it flew by

Everyone who couldn’t participate but still cheered for us, thank you as well

By the way, each and every Hello! Project member performs in a solo corner during this concert…

We still have performances in Hiroshima, Nagoya, Hokkaido, Fukuoka, Sendai, and Osaka,

so where will Yajima sing??(￣▽￣)

And then, what song will I sing(￣▽￣)

I’m nervous, but I’ll do my best

Also, everyone talked about it yesterday,

That said, it seems like the cold is really going around right now,

I heard that when you catch the cold, it’s a good idea to warm yourself up until you’re sweating

You should put on thick clothes and wrap yourself in a blanket even if you’re hot… If you do that, your temperature will go down right away

I hope no one catches cold

And then, those who are already sick, I hope you get well soon

And then, and then, we’ll do our best to stay healthy and finish the Hello! Project concerts with all the members(*^^*)

When I went to see Morning Musume’s concert at Budoukan, my eyes were drawn to Ishida-chan’s sharp dancing

Even though she’s delicate, she dances powerfully

she subbed in for Miyazaki Karin-chan,
who couldn’t dance because of an injury,

and I was moved how the groups reached out and helped each other, and thought that Ishida-chan’s power of support was amazing

Ishida-chan, have a wonderful year

Well then, let’s have a wonderful rest of the day

I learned that Otona no Mugicha’s Nakagami Kazuyasu-san, who appeared countless times in plays with ℃-ute, will be leaving the troupe.

When I heard the news, I was really surprised

In ℃-ute’s first play,
Nakagami-san played the role of “Kanzaki Wakahiro” (Nicknamed Bakahiro), who was the uncle of my character “Kanzaki Raika”(>_<)

I hit uncle Wakahiro countless times on stage with a plastic bottle(^^;;

I couldn’t do it well, so we had to do it over again and again,

but at the time he’d say “Hit me as hard as you can, I don’t mind at all

We were told “When he left the troupe, Nakagamki-san left me a message for ℃-ute…”,

and they read to us what he wrote…

I would’ve never thought that he’d leave a message for us too, so I was really happy

I’m sad that he’s leaving the troupe,
but I hope he stays well, and that we can meet again someday

So that we don’t lose to Nakagami-san, we will do our best to make our dreams come true too

We’re waiting for a lot of people to participate 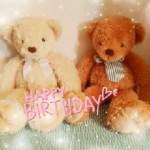 Posted on January 7, 2014, in Blog, Translations and tagged Yajima Maimi. Bookmark the permalink. Leave a comment.