Morning has arrived in Sapporo~(*´∇｀*)

But the clear and pleasantly cool air feels great

From the airport it was about 40 minutes

We arrived at the venue without any problems

The first thing I said when entering the dressing room was

There were zabuton laid out,
and there was also a heater…

For Yaji, it was a really comforting room

…That said, it was my first time using a heater this season(´ー｀)

I thought “It’s already the season for this

But it’s because we’re in Hokkaido~

Whenever I see winter in Hokkaido on TV, it looks really cold… I start shivering just seeing it…((((゜д゜;))))

Everyone in Hokkaido overcomes that cold every year…

A~h, I really have a lot of respect for them(*´д｀*)
I think it’s going to steadily get colder from here on, so please be careful not to catch a cold

I discovered someone snuggling up there

While all the members were saying “How cuteヽ(≧▽≦)/” and laughing loudly…

She was sleeping (lol)

A~h, that kind of Chissa is lovely

After putting our luggage in the dressing room,
we went to eat Obihiro’s specialty, tondon~

I thought my stomach was going to burst~

As expected, I became full while eating,
but since it was so delicious and the “flavor of Obihiro”, I felt it’d be a waste to not finish it, so I ate it all( ￣▽￣)

By the way, I’ve uploaded before and after pictures on the cellphone site “PokeMo” tour diary, so please check them out, if you like

Thank you for the meal

With the power from the tondon, we had the concert

The live house was amazing~

The heat reminded me of our beachside summer concert at Otodama, and I completely forgot about the cold outside

Us and everyone who came sweat a lo~t＼(◎o◎)／

And then, it felt really fresh having a joint concert with the 6 members of S/mileage, and I was able to see sides of them I hadn’t seen before

When S/mileage were singing on stage, I watched from the side, and I suddenly made eye contact with one of the members

And then, they gave me a smile

A~h… I could understand the fans’ feelings (lol)

I was struck head-on by her cuteness

What a nice position

S/mileage were overflowing with energy in the dressing room too…

I think they’re the liveliest group in Hello! Project… (lol)

Takeuchi Akari-chan looked cute as she smiled towards the mirror while putting on rouge, so again Yaji-cameraman sprung into action

There’s a lot of cute girls, so it’s a problem for Yaji-cameraman~(*´д｀*)lol

Since we haven’t had a chance to come to Obihiro before, there were a lot of people who were so happy they cried the instant we appeared on stage and during the handshake event,

We’ll do our best so that we can come again

Thank you for cheering for us from afar

I wrote about some things I ran out of space to write about here on the PokeMo tour diary, so I’ll be happy if you read that as well

Today we have a ℃-ute solo concert at Sapporo Shimin Hall

℃-ute love concerts, so we haven’t been able to contain our excitement this morning…((o(^-^)o))

And then, so that people who came to Sapporo from far away don’t have any regrets either, we will put on the best concert possible

We’ll give it our all

Everyone, if you have the time, please come and join in

Well then, I’m off for toda~y

Everyone in Berryz Koubou, congratulations

I hope ℃-ute can go cheer for them too 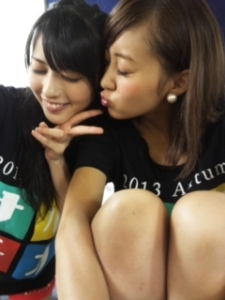 Posted on October 6, 2013, in Blog, Translations and tagged Yajima Maimi. Bookmark the permalink. Leave a comment.