This day has finally arrived

The first day of our Nippon Budoukan concerts

We’ve dreamt of this day…

I wish I could tell myself back then

“The wish will be granted soon

I thought about a lot of things yesterday.

Eleven years since our audition… A lot of things have happened……

But all of those things tie in to today…

I think there are people who are aware of this, but ℃-ute was originally an 8-member group

Even though 5 of us will stand on stage, I want to go out there holding the feelings of the other 3 in my heart

And then, I want to show my gratitude to the many people who showed us the way to make our dream a reality

I learned that in this business,
making your dreams come true is no easy task.

When I passed the audition in 5th grade, I wondered
“How many years before I do this

How many before I do that

and my dreams began to grow

But things didn’t go as smoothly in reality,

But during those times, I was supported by my friends and family, the staff around us, and everyone who cheers for us

Everyone’s warm feelings made me feel

“I can’t give up now

If I had given up on my dream then, this day would’ve never arrived…

Everyone says “℃-ute gives us power

Today one of our big dreams becomes a reality,

While typing this update, I said

“All the nervousness and unease I felt went away before I knew it w=(゜o゜)=w lol”,

For right now though, I’m filled with a lot of gratitude…

everyone who can’t participate but are sending their feelings to ℃-ute as we stand in Budoukan,

A bridge where it’s said your wishes will be granted

3)
Speaking of Budoukan, a can of “budou”

I’ll eat them with everyone before the performance 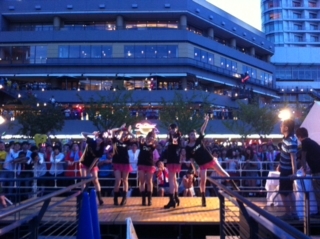 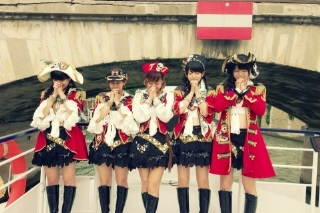