Maimi shares a happy announcement regarding Budoukan and wastes little time getting fired up for the performances in her August 7th update “SOLD OUT°・( ノД`)・°・“. Full translation below.

It’s thanks to everyone’s support

Thank you so very much

Both days at Nippon Budoukan are sold out…

I can’t believe it…

Everyone was really delighted

Amongst those people,
surely there are people who have supported ℃-ute since the past,

people invited by their friends,

people who usually cheer for other groups but became interested in what ℃-ute’s Nippon Budoukan concert will be like,

people who parted from ℃-ute but are coming back, etc……

I think there’s lots of kinds of people

“I want to keep supporting ℃-ute starting tomorrow too

And then, I want to stand on stage with my gratitude so that it reaches the many people who want to participate but can’t

In addition, there were a lot of comments on yesterday’s update from all of the overseas members of team ℃-ute

” and translated the comments, and I was moved when I read them

There are a lot of people who send their support to us from over the sea,

We will show you ℃-ute’s power

…My feelings have been aflame since early this morning…(*￣∇￣*)

Before noon yesterday,
I met up with up with Nacky and Airi and went to eat pancakes

Just looking at the menu made me rea~lly excited

and couldn’t decide for a long time

After thinking about it, I ordered a pancake with strawberries

Nacky took this picture for me

And then, Yaji took a picture of those 2

And then, I think there are people who already know,

but our CMs were uploaded

An announcement and request from ℃-ute

This ℃-ute glowstick…
A considerably long time ago, all of the members agreed

“Someday we want to make a ℃-ute glowstick for the goods

It became a reality,

We started thinking of the design around March of this year,

and while we did that, our Budoukan performances were decided,

It’s a glowstick that changes colors to the 5 members’ colors, so please use it, if you like 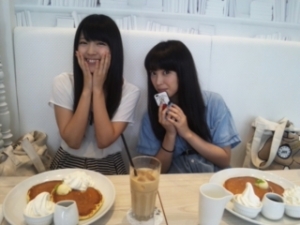 Posted on September 7, 2013, in Blog, Translations and tagged Yajima Maimi. Bookmark the permalink. Leave a comment.