I need to show my gratitude…

Now then, up to yesterday I wrote about the members’ feature songs we recorded for the album,

…Or should I say, it became “Tadori Tsuita Onna no Senshi” in yesterday’s blog

Even though it’s the title of an important song…

Tsunku♂-san wrote this song to commemorate the granting of our dream of performing at Nippon Budoukan,
which will take place on September 9th and 10th

This song really makes me cry

It made me think “He understands everything…

℃-ute has rehearsal now for the tour that starts at Nippon Budoukan and is tied in to this album,

and everytime we perform this song,
my entire body feels flush(>_<)…

The hook goes
“The view from here,
It’s so radiant I’m going to cry,
I close my eyes and I’m enveloped in reassuring cheers”

The view from the stage at Budoukan… I still can’t imagine it,

but during ℃-ute’s painful times,
everyone’s encouragement always saved us… I feel

And then
“From tomorrow,
I want to live cooler than I am today,
I will embrace the reality I see before me”

Right now my head is full with thoughts about how to make Budoukan a success,

but surely, when I’m standing on stage, that is what I’ll be thinking…

℃-ute up until now.
And then, ℃-ute who is filled with hope from here on.

We want to keep running together with everyone

Please be sure to listen to it

Changing the subject,
after rehearsal yesterday,
I met the Hagiwara household’s pet dog Chip-kun for the first time

It looked like a doll (←Hagi) was holding a stuffed animal, so it really refreshed my eyes

His paws were squishy~

There was a time my doggies were like that too~

Thanks for letting me meet him

(・∀・´)
We have rehearsal today too

There was a portion where we wore the outfits at yesterday’s rehearsal,

and they were amazing

I couldn’t stop smiling while dancing(;A´▽｀A

Even our dance instructor shouted
“Happy

For that, I’ll work hard today

Everyone in Morning Musume, congratulations

We’ve yet to reach number 1 on the Oricon charts,

but so that as many people as possible listen to ℃-ute’s songs,

and then, so that we remain in everyone’s hearts, we’ve gotta do our best

and it features ℃-ute’s comments on our Budoukan performance, 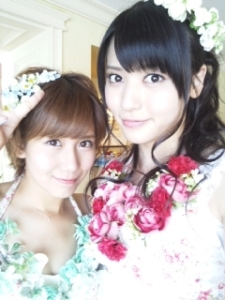 Posted on September 5, 2013, in Blog, Translations and tagged Yajima Maimi. Bookmark the permalink. Leave a comment.