This week’s episode of “HaroPuro! TIME” was the first of four in which Maimi’s trip by bicycle to Shizuoka from Tokyo is chronicled. Her segment started with her deciding to make a 2 night/3 day trip by bicycle somewhere for the purpose of promoting ℃-ute upcoming single, “Kimi wa Jitensha Watashi wa Densha de Kitaku” (You return home by bicycle, I return home by train). For advice on her trip, Maimi consulted with a bicycle-lover from her talent agency, frequent Hello! Project MC and Sharan Q drummer Makoto. Makoto recommended that Maimi travel using a road bike, and that she head somewhere south like Shizuoka. 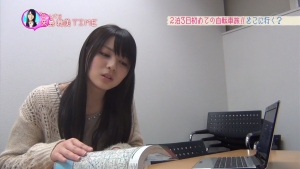 With those things in mind, Maimi searched by map and computer for where exactly to go, albeit with some struggle. Maimi was eventually able to figure the computer out, and commented that people have probably never seen her use a computer, but surprisingly she’s able to do it, to which the on-screen captions responded “Really!?”. At last, Maimi decided to head to the Kunouzan Toshogu shrine in Shizuoka to pray for the success of the new single.

For the next step of preparation, Maimi headed to the bicycle shop Nicole EuroCycle Aoyama and met with the store manager. Once there, Maimi was shown road bikes that are popular with girls and almost instantly decided on the De Rosa bicycle, which she thought was cute. Upon sitting on the bike, Maimi commented on how high up the seat was. She was then lead through the features of the bike by the store manager, before heading over to clothing section. In the clothing section, the store manager told Maimi that the most important piece of clothing when riding a bike is the pants. After going over several notable points about the pants, the store manager added that cyclists don’t wear underwear while wearing the pants, much to Maimi’s shock. 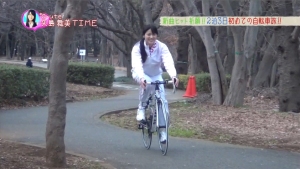 Having gotten all the necessary gear for her trip, Maimi practiced riding her road bike around before suiting up and starting her bicycle adventure to Shizuoka’s Kunouzan Toshogu shrine, which will continue in next week’s episode of “HaroPuro! TIME”. 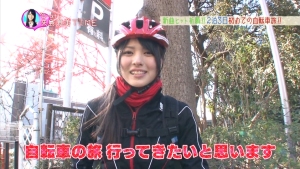 Posted on March 25, 2012, in Recaps and tagged Yajima Maimi. Bookmark the permalink. 11 Comments.