From the ℃-ute staff’s Twitter comes this shot of Maimi taken one hour before the start of the day’s concert, and wearing the parka from this tour’s goods list.

From today the ℃-ute tour starts

I’ve been nervous since morning~

But but, I want to burst open with all my power

Yesterday we rehearsed at the venue using the actual set

and though there were no fans in the seats

I rehearsed while imagining it

I want to meet everyone with a smile soon

By the way, the set also has a near-future feeling that is cute

Having people who support you is a happy thing

Make it a wonderful day

The Yajisuzu pairing from yesterday’s sightings continue today, as Airi again shared a two-shot with Maimi from their meal together in her update on the official ℃-ute blog, titled “

Poka Poka” (the onomatopoeia for warmth rushing through your body).

Here’s the translation for Maimi’s 4/29 blog update, titled “Tomorrow is

Yesterday Tsunku♂ checked on us too, and considered various productions

In addition, the outfits this time
have a big impact too

” is the kind of costumes there are

When all the ℃-ute members get together and wear them, we will laugh (lol)

Those coming to the concert, look forward to it

And those who can’t come because of circumstances, I think I will eventually do an outfit introduction on this blog,

so please look forward to it

1) One picture from after yesterday’s rehearsal

Then, this is the best weather

I hope it becomes a wonderful day…

Maimi rejoined the other members of ℃-ute for the rehearsals for the concert tour that begins this weekend, and Airi shared a two-shot with her from the day’s rehearsal in her update on the official ℃-ute blog, titled “

Genepro” (“genepro” is short for “general probe”, which is a rehearsal where they do the entire performance complete with costume changes and whatnot). Airi added that today, like always, Maimi’s sweat was amazing.

Keep checking blog!project for ROKUN’s translations of the other members’ updates.

Here’s the translation for Maimi’s 4/28 blog update, titled “From today

I’ve become a nuisance for everyone

Last night, and this morning too

If you don’t understand something, ask

“I hope you won’t start to panic

Because we’ll work together

I received in texts from the other members

Thank you very much

I can participate in rehearsals from today, so I’ll concentrate and take everything in

There’s a lot of people looking forward to the concert

The picture, continuing from yesterday, is with Airi in the new single’s outfits

Yesterday after practice, they brought out a cake

There was that kind of surprise

To both of them, happy birthday

Well then, I’ve switched on, and I’m off

P.S.
Thank you for all the comments of support

Today’s Maimi sightings are “Ran” focused, and the first comes from a blog update by the writer/director of “Ran”, Hata Takehiko. Hata shared a lot of pictures from the day’s practice for “Ran”, with the last one showing Ran locking swords with Tsukie (picture 1). Hata also pointed out that Maimi was wearing a shirt from the first performance of “Ran”. Next is an update from Maimi’s “Ran” co-star, gravure idol Sugimoto Yumi. In an update titled “Maimi-chan\(//∇//)\” on her official blog, Yumi showed off a “special shot” of her and Maimi (picture 2), and wrote that the two of them are shy. She continued on to say that she hopes that her and Maimi become close friends.

The picture on GREE has changed

Actually, that picture is
the 16th single released on 5/25

This time
it’s become a bright song with a spirited, refreshing feeling

Today’s picture,
during the cover photoshoot

when I was being photographed,
Nacky took this picture

The cover photoshoot,
there was hopping around,
carrying balloons and other small accessories,
and the feeling of talking with everyone

it was a really fun photoshoot

The release is still aways off,
but I hope that a lot of people listen to it

and that it gives people some cheer

if even a little

And then, from today

the DVD which I perform in,
“Black Angels” becomes available for sell & rental

I was given the role of “Reira”

It’s a live action movie of the popular 80s manga,

I had to be sure not to ruin the image of “Reira” that the manga fans have created,

and I thought of various things in my own way

She’s strong, though somewhere there’s another side to her,

Despite being a hitman, she has kindness,

There are also action scenes, and I got a lot of advice during filming from those around me,

So I definitely hope that a lot of people watch it

Definitely check that out too

Well then, I’m off for today

From the official Facebook page of ℃-ute comes this solo shot of Maimi:

On Airi’s birthday, I went with the manager to buy a birthday cake

When we went to pay, at the next register over there was a man by himself…

That man
“I’m taking this to the area affected by the earthquake, so if it’s possible please pack in a lot of refrigerant

“In the affected area they can’t really eat sweets, so there’s probably people who want to eat something sweet

he thought, and went to the cake store

Somehow, that day had a soft and fluffy feeling

Now,
changing the subject, today was practice for “Ran”…

I took a picture with Sugimoto Yumi

and it seems that Sugimoto is also shy

I will gradually open up from here

Well then, tomorrow I’ll continue to work hard all day 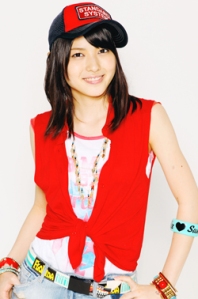 Maimi, along with all of the members of ℃-ute, has had her profile images on the official Hello! Project site updated to reflect the outfit for the upcoming single, “Momoiro Sparkling”. Her profile can be seen here.

■ “Momoiro Sparkling” to be previewed on Five Stars this week
Announced on Nacky’s blog, ℃-ute’s next single will be aired for the first time during ℃-ute’s Five Stars radio program, airing Tuesday at midnight JST.

■ “Momoiro Sparkling” covers added to Hello! Project site
Small previews of the Limited A, B, and Regular additions.

Yesterday was the joint concert with S/mileage at Shibuya C.C. Lemon Hall

I sweat so so much

It was the perfect explosion

I used all of my power

is how I feel

The final stage becomes a test of strength, concerts are mysterious

Getting to see everyone’s smiles, and moving my body as much as I like

The next concert is, finally,
the ℃-ute tour beginning on 4/30

I hope that I won’t hold everyone back…

1) In this outfit, I sing and dance to intense songs

2) And then the encore outfit

The patches are cute

Our force was left-over as an afterimage～(*￣Ｏ￣)

And then, today
rehearsals for the play “Ran”

If you notice, the actual performance is one month away

Today we went from beginning to end, skipping the scenes of those who were on break

I’m still not ready, but I will absolutely improve until the actual performance

and I felt a lot of respect for them